Not An Egg Over Easy

My son likes to alternate between waffles and eggs for breakfast, or to be more precise … two waffles … or … an egg. Omelet? Yes, he enjoys it tremendously, but since I introduced him to the sunny-side-up egg … and importantly … one with a runny yoke, he has eagerly added this to his call list of possible breakfasts to choose from. 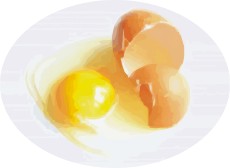 Oh how he makes the most out of dabbing his toast into that sloppy yellow drool of the punctured yoke, and I do believe he is as well entertained by the actual puncturing of it too. A food that doesn’t move … and then it does; something needing further investigation over and over again.

Well, this morning my son asked for the ole runny, and I had it well in hand, no shell following after that cracked egg. The bread was toasted and the egg looked just right with its little gelatinous wobble in the middle. I donned an oven mitt, lifted the small frying pan from the stovetop, and proceeded to try and remove the stubborn egg to the plate, and while I struggled, my wife politely warned me, “Hurry, it’s running.”

“I’m trying. I’m trying,” I said. “I can’t seem to get under it.” It was a cramped pan. One that only fries a single egg, and my plastic spatula was nearly as wide as the pan itself.

“Don’t use plastic,” my wife said. “It would be easier with a metal one.”

But I tell her,” You’re not supposed to use metal on cast iron … it will scratch it.”

Now realize … I’m making a connection between this pan and those other pans with the non-stick surface. You’re not supposed to use metal on them … and they’re black … and the cast iron’s black too. So, rule of thumb … any pot or pan that’s black, I tell myself, “Use a plastic spatula on it.” I should warn you at this juncture in the blog … “I don’t know everything.”

So since I tell myself this, I go ahead and inform my wife of this same logic. “If it’s black, I use a plastic spatula.” But … but now I hear myself out loud … and I can’t believe it. I can’t believe what I’ve just said. You have to understand that I am an open-minded person … I am. I don’t usually say things like this, but as much as I hate to admit it … I fear … and please forgive me for it too … that I have racially profiled.

Not Real: My not knowing everything … just kidding.