The next day, Johnny’s dad brought him to meet the chief. Anxious and distracted by what would follow, Johnny’s father had forgotten that he’d pinned up Johnny’s wanted poster the previous day, and for but a second was clueless as Johnny dallied in the hall … then … Johnny’s elated face quickly reminded him.

“Oh, I see you saw that,” his father said, and for once that morning was able to genuinely smile … and like a blinder, closed out any invasive stares from the other passing bodies in the hall. “The … the chief was happy to have it up. Said it would … it would lift morale.” Johnny’s father knew that the chief hadn’t exactly said that, but he thought it could be a good lead into why they were there. “Chief thought you working for the department could also lift morale.”

“What’s morale?” Johnny asked. Here was another example, for Johnny’s father, of Johnny’s loss leaking through like water through holes in a boat. When his father had thought he’d plugged them all, having accepted them with a sigh, another hole would show its hollow head and the boat would lower another inch. Johnny’s father though had made a successful attempt at not sighing now, now that his guard had fallen and he’d become aware of the multiple eyes on them.

“Morale? Why it’s um…” Johnny’s father knew the word, but never really thought about having to define it. He just understood it. “Um … it’s feeling better about yourself. Gives you strength … you know, the belief you can do something. It’s thinking things are going to be all right. You understand?”

“Good people wear off on other people and make them good,” his father said. “The chief wants a good person like you…”

“So I can make others good?”

Johnny’s father gazed inconspicuously around at any eavesdroppers. “Well, feel better,” he said. “They’re police, not bad to start with, remember?”

“Right, “Johnny said, but his two eyebrows had collided. “So I can make them feel better so they can do a better job?” Johnny’s voice was louder than his father would have liked.

“Exactly, Johnny … well put,” Johnny’s father replied, patting him on the back, and was relieved to see the furrow in Johnny’s brow slowly disappear. “All right?” 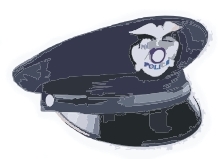 When they arrived, the chief was surprisingly attentive to the needy child in the grown man, answering all Johnny’s questions regarding his being the chief of police, what cop shows he thought were the closest to real, and what doughnut he liked best. He allowed him to play with his cuffs, and did not allow him to play with his gun or taser, and in a very fatherly way made it perfectly clear that they were off limits. Then the chief, after asking his dad if it was okay, treated Johnny to a soda out of the vending machine.

With sodas in hand, he sat down behind his desk, and Johnny sat down opposite him. The chief then proceeded to outline in simple words what he wished Johnny to do here at the police station. The chief clearly didn’t have to warm up to Johnny, or try and figure him out, at least not in the way Johnny’s dad thought he might have to, nor did it seem that Johnny had to warm up to the chief either. The uniform alone had suckered Johnny in, and the uniform wanting him there to work and be a part of this department had him spellbound.

“So what do you think, Johnny?” the chief asked. “Do you want to work here?”

“Do I ever,” Johnny answered.

“Pass out the paperwork, empty the trash bins, help where you can? I’m sure we’ll have plenty to keep you busy … and you’ll get paid.”

“And the posters?” Here was this grown man nearly wetting himself over crayoned posters, and the chief, unlike the-day-before’s laughter, right with him with no hint of a smirk, no sarcasm, no rolling of eyes … just complete sincerity.

“Oh sure … sure, you can use the extra desk in my office to make them,” the chief answered and took a sip from his soda bottle. “I think we’re going to get along just fine. What do you think, Dad?”

The view from my hammock by Jim Reid