Johnny hadn’t moved a muscle in either leg. “I … I can do that,” he said, still ogling at the chief’s crime board as he studiously traced the white outline in the photo with the tip of his finger. 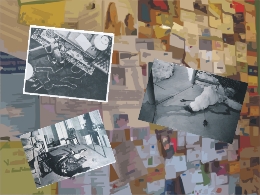 “The chalk,” Johnny answered. “I can send the message to God. My dad said you said I’d be good for morale. Getting God behind us is good for morale. It’s good for morale, right? I can do it. I can. Look.” Johnny emphatically rushed over to his desk and took out his latest wanted poster he’d made. It looked no less nor no more than what the chalked outline in the police shot appeared to be. “I’ve done it already. See?”

The chief, as if frozen in time, stared longingly at Johnny … but then after a moment, realizing that the young man was anxiously waiting with his eyes continually dropping with anticipation towards his work, gazed down at the drawing to appease him … “Yes … it seems you have.” and then returned his attention from the image to Johnny. He took a deep breath. “… I won’t lie to you, Johnny…”

“Oh no,” Johnny thought. He’d heard lines like that before, and taking the cue, almost like a reflex, was already curling into himself with both frustration and disappointment.

“Johnny, the first time I saw your drawing,” the chief went on, “the one your dad brought in, the one that’s out on the bulletin board … outside … I made that connection.”

Johnny’s huddle with himself slowly opened like a porch door a breeze had just pushed.

“I really believe it,” the chief said.

“B-b-b…” Johnny’s child-like behavior could go from zero to sixty in the bat of an eye, in either direction, up or down, or sideways too if he was confused. “You do?” Johnny presently was jittering on his tippy toes and slightly leaning against the cork board. “Believe what?” Johnny asked.

“That you’re the one,” the chief answered.

“You know what I mean, Johnny,” the chief said.

Johnny, wet in the eyes, skipped in place, a concoction of little stuttering and broken gallops, half believing but not fully believing it for certain until he was told outright.

The chief, with a pronounced grin, gazed right into his eyes and put him out of his misery. “The one to do it, Johnny.”

“The chalk?” Johnny’s man size nearly tipped the board over, dislocating a thumbtack and doughnut shop coupon, two dozen for the price of one, onto the floor, as his arms sprang to life.

The chief nodded and echoed, “The chalk.”

Bang. Bang. Bang. A set of knuckles suddenly rattled the chief’s office door, causing Johnny, who’d bent down to pick up the fallen tack and coupon, to smack his shoulder into the cork board and again almost knock it over. The door swung open, its turned knob was held by an officer in his dark blues. “Chief, got a homicide down at Lexington station, a shooting.”

“Don’t think so. Call said it was a woman. Looked like a nurse just off from work.”

“… Graveyard shift.” The irony of it made the chief almost appear comatose.

“You and … Johnny?” The officer scratched his cheek. “Not the homicide unit?”

“No, I’m sorry … yes, send Barrister and his crew, sorry,” the chief corrected his eagerness, seeing how absurd it was already to be bringing the new janitor to a crime scene, and how further absurd it would appear if he’d canceled the homicide unit and placed Johnny in its stead. Of course he wouldn’t have been doing that, he himself was clearly qualified, but it would have looked very much like that regardless. “But I’m gonna head over there too with Johnny,” he quickly amended his last remark. “If his dad asks, that’s where he is.”

“You uh … you really want me to tell him that?”

“Yes.” The chief grabbed his hat and keys. His lack of any unnecessary actions clearly answered the question even if he hadn’t responded … “Come on, Johnny.” and brushed by the officer and out the door.

“Well I sure hope he don’t ask,” the officer mumbled to himself.

“Bye.” Johnny, smiling ear to ear and with his bucket of crayons in his hand, gave a finger-fluttering wave to the stunned officer. “Getting God on our side. You’ll feel better.”

“… Dang.” The officer’s posture collapsed. “Why didn’t that sound like something I wanted to hear?”