I am the gardener, but once I had been the enemy without my knowing it. It’s only on looking back am I able to see the monster I had become. They were two blueberry bushes I’d planted in large pots on the deck, and I had removed them to the house for the winter. What … I sigh … what was I thinking? I wasn’t. That’s all there was to it. I’d only considered how nice they looked in the pots, not considered the ramifications of a potted plant, not invested in their greater welfare. The other plants in the yard, those held lovingly by the earth, were gasping in horror when I’d brought those two inside … but … but I hadn’t heard them. They knew that those berry bushes had received a death sentence, not because I was meaning to kill them, but because I was … ignorant. I politely refrain from calling myself stupid in words, for too many times I have been verbally abused in that way from my own mouth and sure enough without my meaning too I’ll abuse myself that way again here. But at least for now I’ll fend off that urge to … if you will allow me. 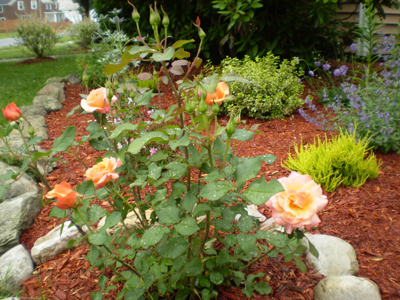 Yes, the rest of the yard knew the fate that waited those bushes only months away, and for once for their sakes, trees, shrubs, and all floras wished for a prolonged winter … to stay that execution, but as time doesn’t stand still, it, unsolicited, came.

Seven months came and went and I’d decided to not only place the blueberry bushes back outside, but also transplant them into the earth where I honestly believed they would prosper. Ironic … no? Where else would one bury something? I gave them hope, those pitiful, not yet totally-woody creatures. Oh, how I now recall how young they were … but yet, I must refrain from calling myself that word, which still abuses me. I must.

I gave those plants hope, by checking on the information regarding blueberry bushes, to see … I made that attempt, you must believe me … to see when it would be safe to plant them in God’s green earth after a sheltered winter inside. Where did I go wrong? The information was straight forward. It said, “AFTER THE LAST FROST.” I was not familiar with any other meanings for these words, or any new meaning created once they were together other than what I knew it to mean, nor unlike I’m sure what you read in it now to be. Age has not changed its meaning … though it has aged me. Those words … those words still haunt me no feebler today.

The blueberries must have thought I was toying with them … and I ask their forgiveness to this day, my days forever no longer separated from night … when I too checked the farmer’s almanac to see when the last frost for the area would be gone, and when it would be safe to plant them. They knew I was ignorant, and that is why the pain of waiting and wanting to still wait was there all winter for them, but now I’d shown a means to education. Discovered a knowledge to save them … and what did I do?

Place yourself in my shoes. You might have done the same most likely. To you, like me, you would have seen them hungering to get outside into the unfiltered air, the unblocked sunlight. You’d seen it as sympathy for them and nothing more. You’d have done it too. You would have! Do not judge me differently than yourself!!! … Sorry. I’m … I’m sorry.

Wh-what did I do? I read the almanac, the correct thing to do. There was no hurt in that. The great farmer, whoever he is, with all his mighty insight said, he told me this, that the last frost in my area, when the ground would be fine for transplanting would be … mid-June.

“Mid-June!?!” I scoffed at it and made those two poor bushes shudder. They must have, though I didn’t see. It had begun. I had crossed that unforgivable line from ignorance to stupidity, wherein I have no right anymore to beseech any clemency of them. A mirror in my face would have shown a deranged appetite leaking through as I put myself above the great farmer. The two helpless low-bush vaccinium must have seen my demonic insatiable lust for power … thinking myself greater than the great farmer, inexplicably believing I knew better and the bushes wondering why them, and not me, were going to be sacrificed for my faults.

I … I um, I don’t recall a breeze when I carried the two bushes outside, but the leaves and stems of the trees and plants and flowers all about me fluttered nonetheless. Again, I would not open my eyes then to the signs of what I would later regret, none of it, because I knew. Blinded, I knew I could transplant them in May. Who of you would have thought any differently?! I’d seen flowers already, delicate little columbines. My blueberry plants were bushes with more starch than those columbines would ever know, yes, they would flourish and grow, extend their roots and bare me great fruit.

Still … still … it’s only on looking back now that I recognize how the natural world outside trembled, how their running sap went still. It was May … only May. Why now does that seem so distantly early a time in the year? It was May, not the beginning of the month, but May nevertheless when my shovel lifted that first crumbled pie of earth and tipped it to the wayside, and followed that with several slices more until there was a small mound, more widely spread, but nearly the exact opposite of the hole I’d formed.

I laid the shovel down … and then lifted the first bush. It’s molded web of soil, peat, and roots were embedded in the pot, no doubt holding on for dear life, but damn, I’d brought those scissors, those two little daggers conjoined, and carved out a surrendering flap from the pot’s side, like a large incision. I peeled back the black plastic like a darkened flap of skin, which was desperately trying to conceal the still beating organ below, the one I was intent on removing. Organs are removed every day and put into new bodies … but I was going to put this one into the ground. If I wasn’t stupid, I was evil. I turned the pot and plant over and gave it several quick little jars. Only some green plant food, like pop rocks, and some specs of dirt sprinkled off. I placed the pot back down, and determinedly spun it to the other side, where I then took those malignant clippers and cut another part in the pot, going from the anus to the brainstem just to get to the heart. I was assuring myself that this time … it would … come out.

When it was turned over once more, it plopped out like baked beans out of a can when the air has found its way in between and broken the suction. I was careful … no matter what any of the trees say … I was careful to hold the small bush at its base and not let it drop. I lined it properly in the hole and fed it water, and then scooted the displaced dirt back into the hole upon its roots … and watered it again for good measure.

The second bush, most likely having resigned to its fate, either that or not willing to live with the guilt of abandoning its friend, slid more easily out of its pot than the first and into the hole, which I had likewise dug for it.

I swear they were beating, when I left them and went inside. Their leaves had been green, glossy green. They seemed to be at the pinnacle of health … and I watered them, I mean I did, day after day for a few days, but somehow I’d find those leaves less glossy and fallen below it and on the ground. Like a cancer I couldn’t stop, they kept dwindling till all their leaves were almost gone … and then they were, except for a couple at best that had dried and shriveled and matted themselves around their disrespected branches. At some point I had considered digging them up and returning them to the house, but I don’t know if it was faith … or the disbelief that I’d done something wrong … whatever it was, and my conscious tells me what it was … I didn’t. Theirs was a cruel death … because it could have been so easily avoided.

It’s been years, and I had been distancing myself from growing blueberry bushes, afraid of the repetition of history … but having succeeded at other, smaller plants … the exotic looking sedum’s in particular … I have rediscovered a courage I had lost and had not expected to find again. I am the gardener. I might need to place my thumb in a cup of vinegar and some green food coloring … but I am … trying.

Not Real: Sticking my thumb in a cup of vinegar and green dye

1 Response to After the Frost