Deconstructing a Pool’s Off Season

Opening the pool … when? That’s the question. It’s warm now, but oh how that can easily change in upstate New York and go back to cold again.

Too soon, and the well-pampered water, clinically proven to be more gentle on the eyes than saline, which I have manifested by dumping two pouches of shock treatment and five fifty pound bags of salt into, and will have to be maintained regardless of usage, will sit there trying to collect algae and cost me money as I try to prevent it … and, like a splinter in my brain, without any form of entertainment to show for it. Where’s the value in that? The value in it is to keep it up, because I’m swimming. If it’s too cold and I’m not swimming, where’s the value? I’m wasting my time keeping the pool clean when I could have been doing something else if I hadn’t opened it so bloody early in the first place, but … but, what if I don’t open it? What if I don’t open it and this heat spell goes on? I’d have missed valuable basking time and what a waste. I could have gotten more days out of that salt if I’d only known. You see, I can’t win. What I need is the “Pool keeper’s Almanac,” if they’ve got one, but that would be like “Playing Las Vegas for Dummies.” Do you see my predicament? Do you? Do you see the mental struggle that confronts me every end of spring? I’d like to keep that maintenance-to-usage ratio at, at least, 1:1. 1:2 or 1:3 would be even better.

Oh … right … did I mention that I have a chlorinator? That might clear things up. You may have wondered on the salt, and if you thought, “He couldn’t be making soup for the cannibalistic neighbors.” you’d be correct. Now I know most of you wouldn’t have assumed it, but for the few who have: The chlorinator is not a big guy in heavy metal, packing an armory. It’s a piece of equipment hooked to the hoses running from and to the pool that changes salt to chlorine through electrolysis. Sorry, I saw a couple of you hairier ones there cringe at that. I assure you that your follicles are safe. I myself am not fond of hairy lily pad nests floating about either.

Now the chlorinator, there’s a piece of equipment. It actually works very well if I don’t look at my electric bill. When it comes to pools, it’s somewhat of my electronic soul brother. It has a thing with ratios too. I don’t know what they are, but if the salt content is too high, it will beep with a red light and not chlorinate. If the salt is too low … it will also beep with a red light … and also not chlorinate. I know … it sounds very much like a union member. Now, a few times I’ve fallen short with the salt and it was no problem, I just added more. The elephant in the room though, or rather, in the backyard, is what will I have to do if the salt content is ever too high? Do I have to empty a thousand gallons of brined water (My berry bushes are pleading, “Please, don’t.”) and then refill it with newer and fresher water? The flag goes up on that. I don’t have a well. That’s metered water, which means I have to pay for it. Now, I’m not a skinflint, but what if it gets cold again … ay … you see where I’m going? The maintenance-(cost)-to-usage ratio, you see? 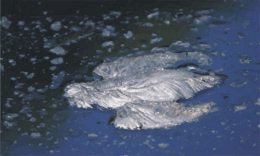 I found a dead bird in my pool. Twice I found a dead bat (Two different bats. I don’t believe in the clawed and flying dead). The bats like to hang upside down at the entrance leading to the filter. I guess it’s like a cave to them. But I’ve skipped ahead. This is after the cover’s off. So first and back to the start … when do you take the pool cover off?

It should be … any other place in the world that would make sense, but not here in my backyard. When do I take the cover off the pool? I take it off before the sperm bank takes hold.

“What the hell?” you’re saying … at least I hope you’re saying that or else you’re scaring me, so let me quickly clear it up before your minds wander beyond recovery. With one word I think you’ll understand … “Tadpoles.”

Yes, thousands and thousands of black circles with wiggling little tails behind them.

If there was a part in the play “Reproduction,” they’d get it. Which makes me think: Did those two tree frogs do the nasty in my pool? You say, “Two?” but I say, “Yes, two!” because I don’t even want to go there.

Nothing like this had happened in the first 10 years, so why now? But you know what? The croaking in the trees has gotten louder I guess, and I know. I know. It’s all those long-legged chaps saying, “I know where you can take her, ribbit, I know where,” as they slyly grin and flap their webbed feet in my pool’s direction. Obviously some bimbo and her john got lucky in my pool and blabbered about it.

Look at their mouths why don’t you? If there’s any animal that has a blabber mouth, it’s a frog. Come on, it looks it.

So I have to pay for their irresponsibility … because I have a heart. I can devour frog legs in a chardonnay wine sauce, but I will not send these minute spermies to their demise in the filter. Call me inconsistent, but there I am. My small son has also taken an interest in these aquatic invaders, which means when I lose heart … sigh … I still won’t be able to send these little buggers into the pump. “Crap” I say prematurely, because I’m looking back and I know this will happen to me again.

What to do? Well, my son has got a big, probably 10 to 15 gallon bucket. I’ll put them in there, fill it with water, use the strainer from the kitchen … hey, it was on its way out anyway … and transport those fertility poster boys to the pond nearby. It’s a plan that will work, if it doesn’t spill all over the car.

Now to understand my state of mind, take a load of this. When I told a friend of my conundrum, she asked if she could bring her grandson over to collect one. I didn’t know how to say, “No,” because … even though how I felt … I knew I would sound stupid, or callous for denying a small boy his tadpole. I had thousands of tadpoles to get rid of. Wouldn’t you have thought I’d have been happy to have him show up with a backhoe, scoop them up, and take them away? But I was bothered over that one single spermy sentenced to prison in a jar. I am a man on many levels … and off of a few others. 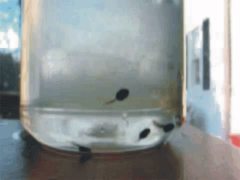 Well, her grandson came and got one, and I buried my thoughts in my work, straining the little imps from my pool, and the distraction worked. Once I had the filled bucket in the car and had transported it, I tried to be as inconspicuous as I could, dumping that batch into the lake, afraid someone would ask what I was doing, because I knew other people would think me insane. One boy at the lake actually did ask me … and, surprise, he thought it was cool. But then he looked a little too eager to get one of those spermies for himself.

“I could drown the boy and no one would know,” I thought. Oh come on. I’d driven five miles to the lake and five miles back between each batch and there’d been multiple trips. I hadn’t gone through all this for that!

But then someone called the boy and he left. Good … he hadn’t gotten one of the tadpoles. I put the empty bucket back into the car … and did it all over again … and again.

After what had seemed like hours if not weeks, and the value of the car now dropped plenty, smelling like pond, I was satisfied that I’d rid the pool of all the spermies … but honestly, if I saw another one of them at this point, it was grass food … of course when my son wasn’t looking … obviously.

I laughed like a madman when it was done and the pool cover was finally pulled back to reveal two shriveled, grey tree frogs. I gathered they’d been trapped under the cover on the ledge and dehydrated by the sun. I didn’t know if there was any justice here, or if there was a message to be had, for what I’d done. They were like two stiff and dirty pieces of meringue with the body mass of a Cheetos. I accidentally stepped on one when I was walking the ledge, and it crumbled into ashes, but I blew those ashes to make sure they didn’t go in the water, and scraped my sneaker soundly in the grass. Something got the other one. I’d used a leaf to put it on the shed’s window sill, and then it was gone. Knowing my luck … it’s a ghost that will probably come back to haunt me … and advertise to the other frogs … a good spot to tongue one another.

Real: The thousands and thousands of tadpoles, the bats, the bird, the chlorinator

Not Real: The two frogs at the end are true, but happened at a different time.